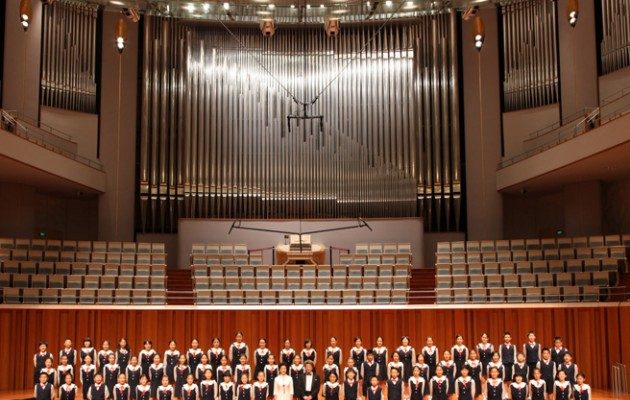 The Children and Young Women’s Chorus of the China National Symphony Orchestra, also known as the National Children’s Choir of China, was founded in 1983 by Yang Hongnian, a renowned music educator and conductor.

In the past 25 years, under the training of Professor Yang, the chorus has accumulated more than 1000 songs and over 600 performances. The Chorus has performed in Europe, America and Asia as well as Taiwan, Hong Kong and Macau, leaving excellent impressions everywhere they visited. They have been awarded eight international major awards.

On August 8th 2008, 66 singers from the chorus participated in the Opening Ceremony of the ‘29th Olympic Games’ singing The Olympic Hymn.  At the beginning of 2012, the chorus was invited by KT Wong Foundation to join the KT Wong Foundation and NI Opera’s co-production of Benjamin Britten’s critically acclaimed children’s opera Noye’s Fludde. In what promises to be one of the key cultural events during the 2012 Olympics and London 2012 Cultural Olympiad, Noye’s fludde will reignite the spirit of Britten’s extraordinary opera to new and worldwide audiences. 12 members of the National Children’s Choir of China will perform together with the Chinese community in Belfast during the premiere of this truly exceptional opera at Belfast Zoo.

The Choir will be led by Maestro Yang Hongnian and Maestro Yang Li, together with Artistic Director Mrs Tang and Singing Teacher Ms Zhou.