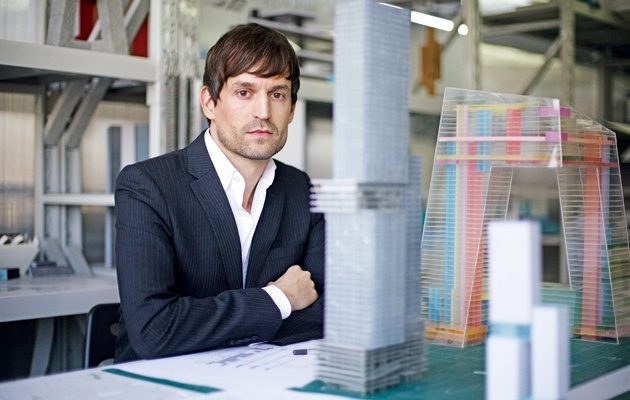 German-born and Beijing-based Ole Scheeren is principal of Buro Ole Scheeren and an internationally celebrated architect and visiting professor at Hong Kong University. Educated at the universities of Karlsruhe and Lausanne, he graduated from the Architectural Association in London and was awarded the RIBA Silver Medal.

At Buro-OS, Ole Scheeren is working on Angkasa Raya, a 268 meter tall landmark building in the center of Kuala Lumpur; a large-scale urban development in Singapore; a studio/gallery building for a Beijing-based artist; and the new headquarters for Guardian Auction in Beijing. His investigation and exploration of new prototypes for architecture at various scales also includes the development of a new kind of kinetic performing art space/arena, as well as an 800,000 square meter mixed-use development in Chongqing.

Through Studio Ole Scheeren, he is exploring his more personal interest in non-architectural projects and interventions, such as Archipelago Cinema, a floating auditorium first conceived in the Andaman Sea of Thailand and now to be installed at the 13th Architecture Biennale in Venice.

Prior to launching Buro Ole Scheeren in Beijing and Hong Kong in March 2010, Scheeren was Director and Partner along with Rem Koolhaas at the Office for Metropolitan Architecture, and responsible for the office’s work across Asia. As partner-in-charge and the architect responsible for one of the largest buildings in the world, he successfully led the design and realization of the China Central Television Station CCTV and the Television Cultural Centre TVCC in Beijing. Other projects include MahaNakhon, a 310-meter mixed-use tower in the city of Bangkok (under construction); The Interlace, a 1040-unit large-scale residential complex in Singapore (under construction); The Scotts Tower, featuring high-end apartments in Singapore; a media center in Shanghai; a project for Shenzhen’s new city center; as well as the Taipei Performing Arts Center in Taiwan (under construction). He directed OMA’s work for Prada and completed the Prada Epicenters in New York (2001) and Los Angeles (2004). He also led numerous other projects including the Beijing Books Building, the Leeum Cultural Center in Seoul (2006) and the Los Angeles County Museum of Art.

Ole Scheeren has contributed to various arts and culture projects and exhibitions throughout his career, including the International Highrise Award Frankfurt, Beijing and Milan Triennales, China Design Now in London, Cities on the Move at London’s Hayward Gallery and in the city of Bangkok, Media City Seoul and the Rotterdam Film Festival. In 2006 he designed two exhibitions for the Museum of Modern Art in New York and Beijing featuring the CCTV project. He regularly lectures at various international institutions and conferences and serves on juries for awards and competitions.